derived from the Taino name "Xaymaca" - "Land of Wood and Water" 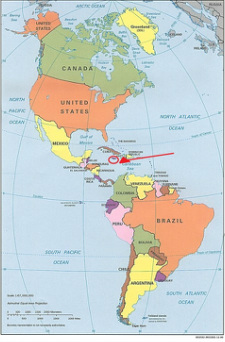 Jamaica is an island country located in the beautiful Caribbean Sea.
In the Western Hemisphere, the Caribbean Sea borders the Atlantic Ocean.

Today's Jamaican people came from Africa, Europe and Asia. The majority are of West/Central African descent. The minority are mainly of Chinese, East Indian, European, Syrian, or Lebanese descent, with many people being of a mixed descent. Although the stereotype of a Jamaican is a dark brown-skinned person, there are Jamaicans of a variety of skin colors and even have Indian, Chinese or European features.

Many forget that Jamaican is not an ethnicity; it is a nationality and it is a culture.

From the language, music, mannerisms, clothing, to the food, the Jamaican culture has mostly African and European influences.

National Motto - "Out of Many, One People" [Out of many cultures, but still one united people]
National Anthem - "Jamaica, Land We Love"
National Bird - Doctor Bird
National Dish - Ackee and Saltfish (Codish)

Abolition of Slavery - August 1, 1833 and the "System of Apprenticeship" instituted, allowing for the total freedom of slaves in August 1, 1838.

*Jamaica is one of the world's main producers of bauxite!